How did I get into this mess?

One of my housemates came into posession of a Pikachu N64. A slight issue - it's NTSC, and we only had PAL games.
At first I tried replacing the CIC in one of the games with an UltraCIC which reimplements the CIC protocol on an ATTiny (see here), but this lead to it generating a NTSC video signal at 50Hz, as the game controls how fast the refresh rate is. None of the displays/capture devices I had managed to handle this, so it's back to the drawing board.

I figured the N64 bus is relatively low speed, and decided to make it A Project™.

I opted for a 512Mbit SDRAM to hold cartridge data as that's the largest possible N64 game, and an iCE40 HX4K FPGA to handle the cartridge bus, as it's supposed by the open source [IceStorm] tools.

This mirror of an old page is the only real resource I managed to find on the N64 bus timings, but has been extremely valuable.

The cartridge bus is 16 bits wide, with the address multiplexed onto it - the address gets latched by ALE_L/ALE_H. !READ/!WRITE indicate a read/write on the bus, automatically incrementing the address.

At first, I added support for my board to the LiteX SoC framework, as a way to test that the hardware was okay. In the long run I want to develop a custom SoC using the SERV RISC-V core and a simplified bus structure, as the LiteX SoC had things that aren't needed, like the ability to run code from DRAM. This makes it quite large...

but it was good for testing.

For this I need a custom SDRAM controller - ideally it can be simplified by only supporting long burst data read/writes, as reading from SPI flash / SD card into SDRAM should be done in long bursts. The N64 protocol lends itself well to reading a 256 byte chunk from RAM whenever the address is set explictly, as there can be up to 256 bytes read between ALE_L pulses.

I've been trying to implement this, but it doesn't work on hardware (yet).

As something else to do I implemented the N64 bus protocol and logged the read addresses into a block ram - it's capable of reading the bootcode (also stored in block ram for now) and starting to read the rest of the ROM (for checksumming).

Now that I have a SDRAM controller (mostly) working, I decided to get a CPU core executing some code. This turned out to be harder than I thought..

A few issues I ran into along the way:

This meant that when my Wishbone RAM module was holding ack high past when SERV dropped cyc, some extra logic was being enabled that made everything fail in weird ways.

Thanks to Olof for helping me figure this out!

Some issues: I accidentally left the write port enable activated after a write finished, which meant that reads were broken. This looked like it was some kind of simulation/timing bug, due to Yosys write transparency logic forwarding the written data to the read port.
Another more subtle case of this is that I left the write port enable active for one cycle after cyc was deasserted - SERV drops the value on the data bus as it drops cyc, meaning some garbage was written to the memory instead.

So now I have some assembly and some C code running and (mostly) working. Next up is probably a core that can take data from SPI flash and transfer it into RAM as quickly as possible. After that all I need is to hook up the N64 side to RAM reads and things should mostly work.
Of course for this to be possible I need to fix the SDRAM controller first...

This is a diagram I've had lying around on some paper for a while, I got around to adding a couple edges to it + rewriting it in Dia. 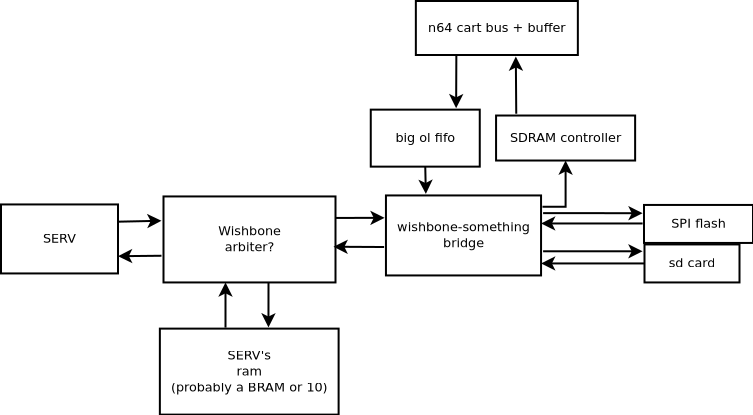 There aren't a lot of peripherals that are actually needed for a first test - just SPI flash & SDRAM.